This isnt a common issue but there wasn't a lot out there to help folks, So in case anyone comes up with this problem and searches on the interwebs, this can hopefully help someone!

In December, I was driving on a crappy Houston road and hit a pothole, which blew out my left front tire. I swapped the tire out for the donut, limped home, and went Discount Tire Monday morning. They warrantied it (I bought their certs) and had me on the way.

A Day later, I notice over 55, there's a rhythmic noise. The faster I go, the louder it is. Order a hub and bearing assembly from the dealer. Attempt to remove the hub the following weekend. Impossible. Slide hammers, heat, pullers etc. Nothing can be done to remove this thing. Decide to abandon that plan and bought a used bare knuckle from LKQ from a wrecked taurus for 29 bucks. Get knuckle in, remove all associated parts, install new knuckle and CV Halfshaft while I'm there, and hub assembly. Button car back together. Drive it, and its great.

In January, I got in to Discount for a Rotation and Balance. On walk around, the salesman notices the left rear tire has a little gash in the sidewall, probably from the same pothole. They order a tire from another store, and install it on the right front (I rotate cross pattern for AWD). Sent me on my way.

A week later, I notice when I'm accelerating hard to get on the freeway, I have to hold the wheel left a little to keep it straight. The steering wheel isn't cocked right when accelerating, but if I didn't hold the wheel it would veer hard. Letting off the pedal set it straight again. My first thought is that I had disturbed the alignment when I had replaced the knuckle/hub. So we go in for an alignment. Everything is within spec except toe, both front wheels are slightly toed in but not way out of spec. Get the car out, still does it but not as bad as before.

Today, I dropped by my local discount tire. Talked to the guy I know, and asked him if he had any suggestions. We both agreed that swapping the tires left to right on the front would be the first step. After we swapped the tires side to side, I could tell before I left the parking lot that the pull was now going towards the left. Turned around and went back inside, and he moved suspect left front tire to the rear on the left side. Pull is gone. So He advised me to call him before my next rotation and he would order a replacement tire and swap the defective tire out. What happens is one of the belts shifted during the manufacturing process and you get something called radial pull (or push), which causes the car to drive funny. The issue isnt as obvious on the rear, but in another 5000 when I go back for rotation, it will be an issue again.

See this diagram from aa1car.com that shows the layers of belts.  If one of those plies moves during manufacturing (its impossible see once the tire is manufactured) there is what is called a "Conicity problem"  Meaning the tire takes on a cone shape when inflated.  Acceleration forces make it worse which is exactly what I was experiencing. 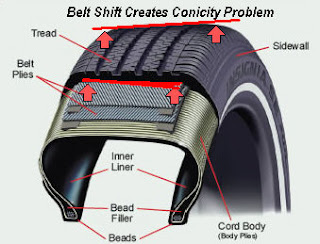 Fortunately, my local tire store has good guys working there and took the time to help diagnose my issue, before I went and spent too much time and money chasing ghosts, or handing the keys off to a dishonest repair shop!